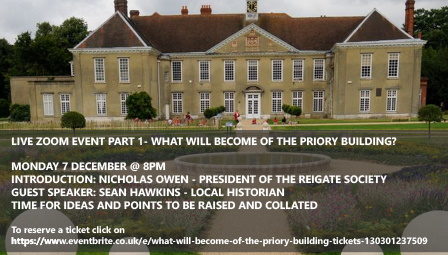 History is in the making. The Reigate Society, which cares about historic and modern buildings in Reigate and Redhill, will hold its first online meeting. The subject? A key historic landmark in the borough.

The point of doing so is to discuss the future of the Priory building in Reigate Park – the very same building that sparked the formation of the society in 1952.

Back then, there were plans to build a bypass through the park, that would have involved the removal of the building. For the past few years, this building has been the home of the Reigate Priory School.

The foundations of the Augustine building can be traced back to 1235. Those parts are really only visible from the inside, but the building today is still an imposing site.

Onlookers can imagine much: how Edward VII took his mistress for visits there in the early 1900s. Perhaps they played croquet outside, or more likely threw lavish parties in this sprawling mansion. It offers a majestic backdrop for visitors to Priory Park, from joggers and 5km Parkrun participants to parents and children looking for chill out time, or for amateur footballers battling those horribly sloping pitches.

There’s even a beacon right opposite, which could be lit, like thousands across the country, as a warning if foreign invasion ever happened.

But what next for this grand building? Reigate Priory School has announced it wishes to explore the opportunities to be housed at the former Canon building towards Woodhatch. This is where Surrey County Council is also to be based.

The Reigate Society will hear from its president, Nicholas Owen, and guest speaker Sean Hawkins, a local historian. Then it will have initial discussions about what the public would like to see happen at the site. There are also other plans in the area to discuss, such as a new crematorium at Earlswood.

Anyone interested in history, particularly the future of historic buildings, might like to take an interest, before the discussion happens all too late. Some residents’ memories will no doubt be fresh with the failed attempt to save Longmead earlier this year.

The Society aims to hold local authorities to account on the site’s future. On its website, the Society details its overarching aims. These include conserving and improving the environments of Reigate, Redhill, Merstham and surrounding areas. The society also encourages “a high standard of architecture and planning”.

Its annual activities include playing a significant role in putting on the Heritage Open Days in September each year. Another function is presenting Civic Awards to examples of quality new buildings. In recent years, these have included the Harrison Centre at Reigate Grammar School and the St John’s Church, Redhill, Community Centre.

The talk about the Priory building will take place on Monday, December 7 at 8.20pm. Those who want to attend are asked to sign up via event brite. Full details can be found on the poster or via the Reigate Society’s website or on the link here https://www.eventbrite.co.uk/e/what-will-become-of-the-priory-building-tickets-130301237509.