Caning the recycling in the garden

For those of us lucky enough to have gardens, if they are anything like mine they are looking tidier than ever – and that’s just in the hours at the weekend which, in normal life, would have been used up doing much else as well.

OK, that might be a bit of an exaggeration, but only just. While those of us who normally work in an office and have been working at home for a few weeks can now find a few extra hours per day (when we would have been travelling) as well, it shouldn’t be a surprise that gardeners are now down to the jobs that absolutely totally need doing.

Yes, I mean those jobs which we never got around to. Like ensuring the edges of the lawn to the fence or flower-growing borders are straight, after mowing the grass. Or uncovering that long-lost path. Or taking every weed out of the strawberry patch. Or flower bed. Or between the cracks in the patio. Ditto a path.

The totally essential jobs, like rediscovering a hidden path, are done

The greenhouse is full, it’s just a case of waiting for the seeds to germinate. Then round two can start and more planting can take place.

For which that stockpiling of compost from the garden centre before it was forcibly closed won’t be enough. Luckily, the supermarkets – and some local stores – are starting to sell it, as well as plants.

The mind turns to finding ways to recycle even more than ever.

Guinea pig waste and bedding has long since been inserted into our compost “dalek” pile (which has long since been overturned and inserted into pots and planting areas). This can’t be put in the “garden waste collection” brown bin, because animal waste isn’t allowed (see Reigate and Banstead Borough Council website) – despite the fact that guinea pigs and rabbits are vegetarians. And it is therefore fine to put all their toilet waste and bedding (hay and straw) into composting.

However, I am with Steve Rolph, who wrote to the Surrey Mirror letters page recently to ask: without garden waste collections (or the recycling centre being open) has anyone found a viable solution to sensibly destroying bind weed and other materials that need removing? Perhaps next door’s wood chipper will come in handy. But then what? I won’t be putting it in the compost. I’ll just have to wait for the recycling centre to reopen.

The hay or straw will also, in due course, make good anti-slug material in due course, around strawberries. The excess just goes in black bin bags. If the council doesn’t want it in the garden waste, it will at least be natural material in landfill or burn well in an incinerator, but if anyone can make use of it on their allotment…. 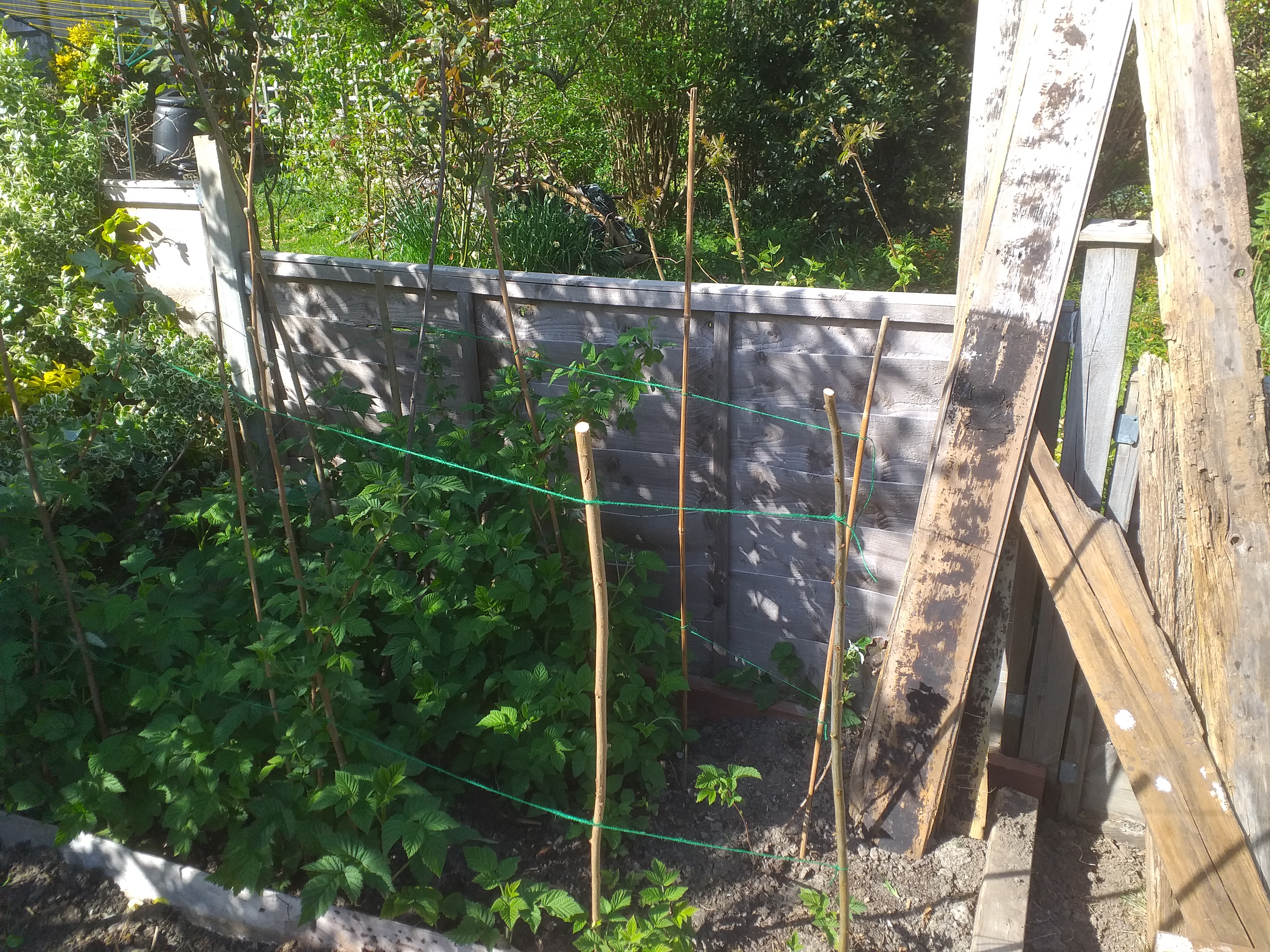 The raspberries are already caned up

So what else can one recycle? In lockdown or not? Next door has been chopping away at trees that need pruning. Branches of anywhere between four and six feet have come in handy as canes, for the already flourishing raspberries.

Those compost bags, fast emptying, could make general bin bags, but they are useful for two purposes: collecting all the debris from the garden means many are full, waiting for the waste collection opportunities to restart, but others are being used for growing more potatoes than planned.

And a broken outdoor brush? It finally broke after rusting. It brings to mind a joke from Only Fools and Horses that has been doing the rounds.

Rodney “No work today Trig? I thought you were a key worker?”

Trigger “No Dave, I don’t work with keys. I only work with brooms.”

I digress. My redundant broom handle of rusted iron will be the strongest cane when the beans, sweetcorn and peas start growing. Or if I was feeling really inventive I could probably find a way to hang a bird feeding device on it. But I already have a bird feeding device.